Some of the Quilted Beauties from Days Gone By

Tonight we wanted to show a few quilted works that were probably made 70 to 85 years ago during either the Depression or World War II. Quilting enjoyed a revival in those days and many quilters undoubtedly used their art as a way to express themselves during hard times.

It’s easy for us to say that people quilted then to provide bed coverings in winter, but that doesn’t explain the large number of quilts that were made and their stunning beauty. There are only so many quilts you can put on a bed and, besides, lots of people slept underneath a feather ticking when ice covered the windows. There were wool blankets, too. They were scratchy and may have come from the family’s own sheep, but they were warm.

Quilts were needed in those days for babies. Sometimes used for “pallets” for babies, they covered wooden floors or graced the yard so that babies could play or nap on a clean and bright surface. They were in cribs, in trundle beds, and wrapped babies and children during trips by train or car. We can imagine all the baby quilts that were given to mothers whose husbands were off looking for work or who, later, were fighting far away. We can imagine the baby quilts for those who became fatherless.

Obviously quilts were art even during those hard times. They were made for weddings, for births, for celebrations. Friendship quilts and commemoration quilts brought people together. The giving of quilts had to have been a type of reassurance, the strength that comes from connections. Those connections formed the blocks that helped hold people together. It’s nice when they can be beautiful, too.

We’d like to thank Judy, Dee and Cheryl for sharing these beauties with us all. 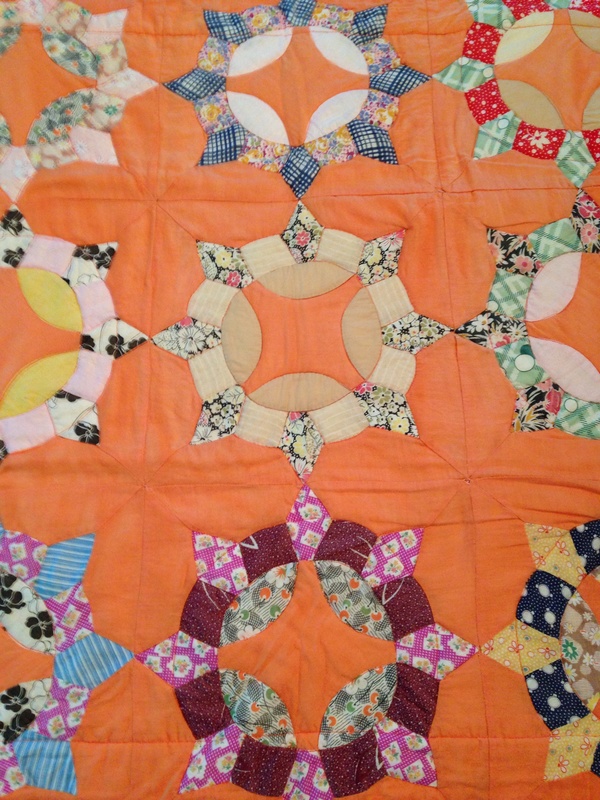 from: Judy Bro Kline: “Do any of you know what this pattern is called? I think the quilt is from the thirties.. “

There are a couple of patterns similar to this one: “Grecian Star” (also known as “Strawberry Patch”) and “Friendship Ring”. More than likely this one was a Friendship Ring where scraps of material were given by friends. It was popular during the Depression. There’s probably some left over material from homemade shirts and dresses in this quilt. The orange may have helped brighten a room and chase away hardship. 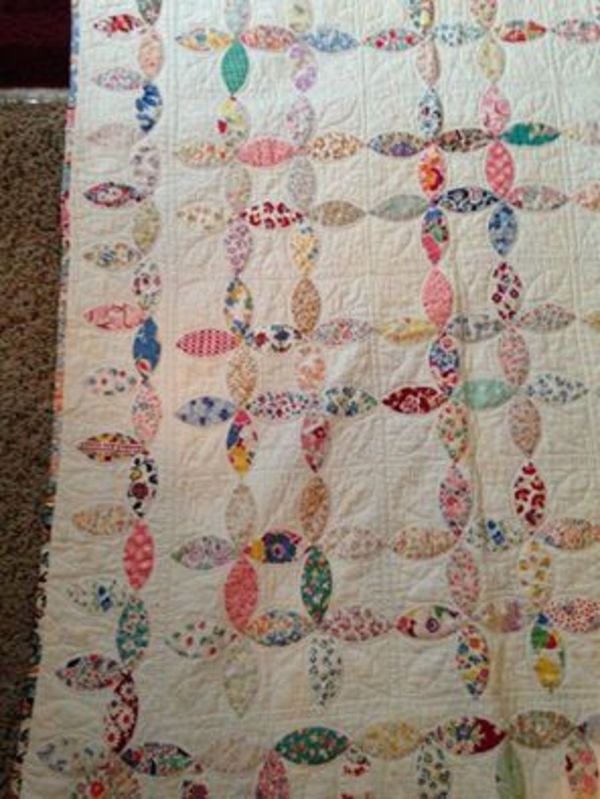 from: Cheryl Hutchinson Perrine: “Had to share this quilt I found at a consignment store. It appears the petals are needle turned appliquÈ. Has anyone ever seen this pattern before? It is 1930’s fabrics—original.”

It’s wonderful that Cheryl found this beauty in a consignment shop. It is hard to see quilts made during the Depression or World War II, or even older, stacked up in shops or auctioned off at sales for only a fraction of what their worth would be in time and materials…and love.

This pattern is what we call “Tea Leaf”. It is an old pattern, dated by Jinny Beyer in her book The Quilter’s Album of Patchwork Patterns to 1897 from the Ladies Art Company. (page 318). It also has other names such as “Lover’s Knot”, “Linked Petals” and “Bay Leaf”. It was very popular during the Depression and early WWII years. Ms. Beyer documents its appearance under differing names in seven publications from 1932 to 1942. 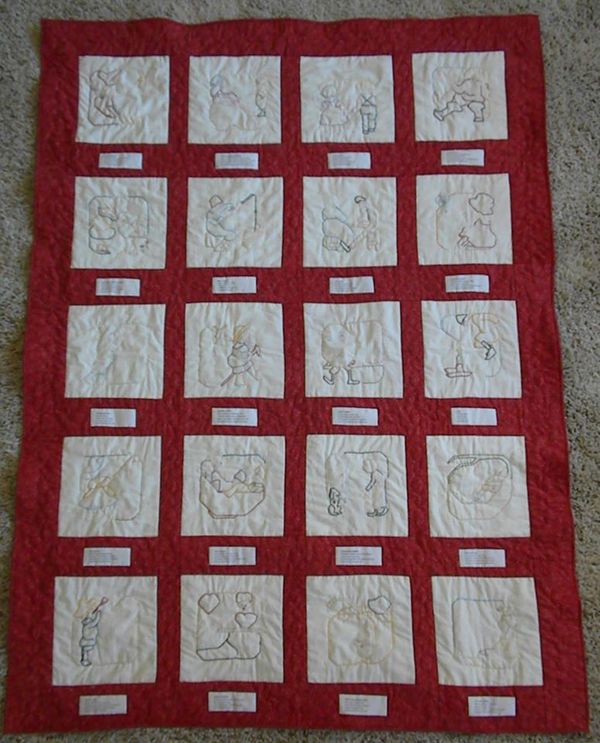 from: Dee Snook: “This was a Mother Goose quilt top made in the 40’s that belongs to a friend. It was deteriorating so I took it apart and remade it and quilted it for her. So much better in red. Also added the poems to each square.”

Dee has certainly put Humpty back together again! She’s given this child’s quilt new life that will allow it to delight for more generations. It’s so nice, too, that children will be able to read the rhymes that go with each blocks, too.

One of the nice things about quilts made so long ago is that they still invite wonderment. We can wonder about the lives of those who made them. We can imagine how they were used.

Now we, ourselves, continue the stories and make new ones.