The Meaning of the Quilts in Our Lives

This is Nancy with 24 Blocks and I have to admit to growing up with more quilts than we could use and some that were not well-appreciated. As children, we took them on picnics. We made forts out of them while in elementary school and used them for back-yard sunbathing while in high school. An old quilt was always carried “in the boot” of the car in winter. At my grandparent’s house, an old quilt was used to wrap the old fashioned ice cream churn while we struggled to turn the crank.

But the good quilts were off limits. When company was coming they graced the beds. Others just never seemed to make it out of the top shelf of the closet or out of the cedar chest where they were all rolled and covered in sheets with pillowcases on the ends. They were never washed, just shaken out every spring and pinned on the clothesline for a short time “to get some air”. A few of them are below.

Every time they were brought out, I heard the stories that went with them. The most vivid was of the appliques, one of which is below, that were called “Mary Ann’s Quilt”. The pattern, according to family legend, was created by my great-great grandmother sometime between 1820 and 1830. It was passed down generation after generation. The quilts she made have long since disappeared, but I have two identical ones made by my grandmother and a great-aunt.

Mary Ann, my great-great grandmother, was beautiful. I have her portrait. Her husband, however, was a Virginia aristocrat who couldn’t quite make-it on the Kentucky farm he purchased around 1830 while waiting to claim a larger land-grant he had inherited. He gambled and died early in debt. Mary Ann, the beauty, died riding horseback alone…supposedly to visit his grave miles away. Somehow on a Kentucky farm that drained their dreams, in a home that sat on a hill overlooking a small river, she quilted and created beauty. The farm is still owned by her descendents. Her grave is in the back, miles from where she buried her husband. 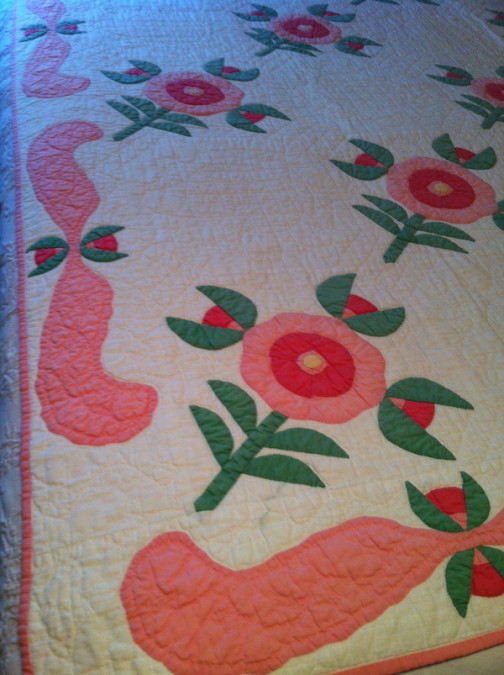 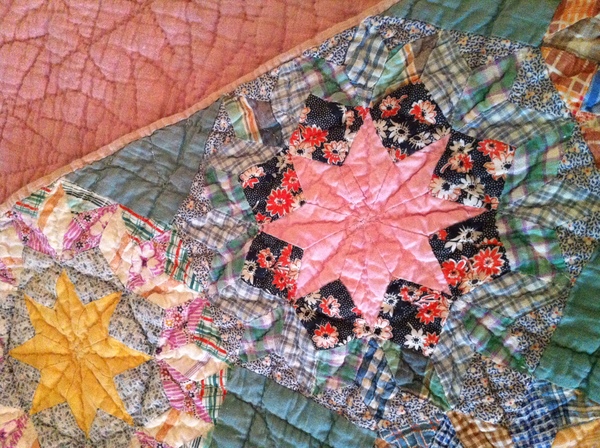 The quilt above was made by my grandmother, probably with the help of her mother-in-law. My grandmother’s own mother had died when she was a child and she was raised by relatives. Fortunately her father had the means to educate her well. She married after a few years of college and proceeded to have nine children. Somehow during all of it she was a prolific quilter, seamstress and crocheter. You can see the tiny stitches she made in the quilt above. She also used scraps from the clothes that were outgrown in the family, or left from her clothes-making projects. She made dozens of quilts, maybe up to a hundred. Each child, when they established their own households had many of her quilts. 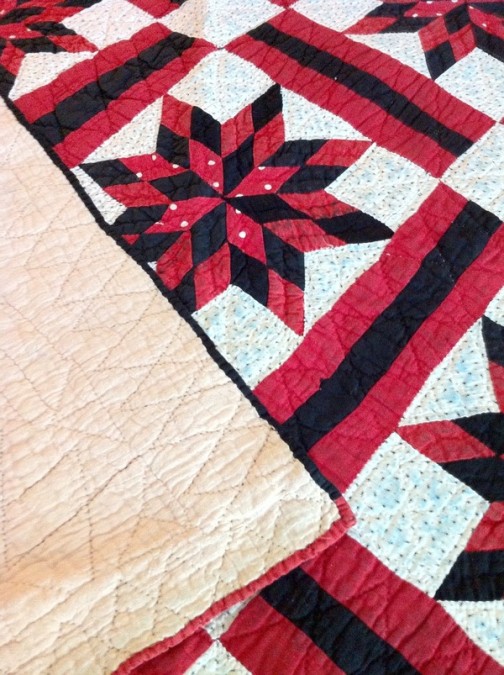 My grandmother tended to make quilts with red, black and blues for the “boys rooms”. This version of “Connecticut Star” was one of her favorites.

My grandparents were hard hit by the Spanish Flu epidemic of around 1918. They had several young children at the time and 3 of the boys and my grandfather were taken ill. They didn’t expect one boy to live, but they all pulled through. In an extra measure of caution they burned all the quilts that were used at the time. This one would have been made later. I know it that was used for decades on the bed of the boy who almost died. 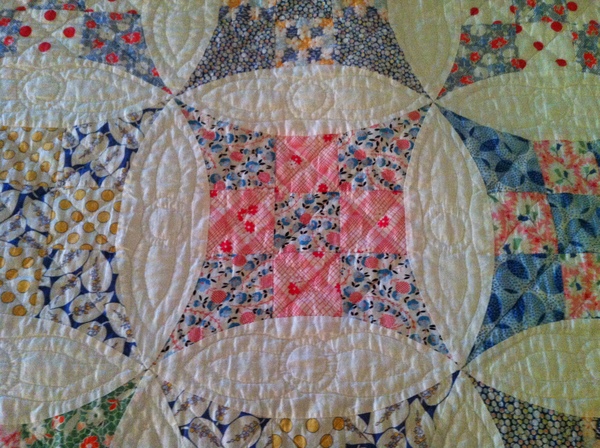 This “Improved Nine Patch” was made by my mother-in-law in her early 20’s and contains material from her little girl dresses and some feed sack material. She had started college, but the unexpected death of her father meant she needed to come home and work to help support her three younger sisters. Her mother taught her how to quilt. She stayed a quilter throughout her life. When I see this quilt, I can imagine her going to school as a child in dresses made of these fabrics and their purchase of flour and corn meal in sacks that would be put to practical use.

Most of us who quilt have stories like these, stories of art in the midst of life and death, of dreams formed and reformed by necessity. They form a part of who we are.

Now we get to pass the stories on…and to create new ones told in our stitches.