The Double Nine Patch pattern is one of those old, but yet flexible patterns that can be used to create so many differing looks. It’s often considered a good quilt for beginners and there are many resources available to help a quilter master the varying techniques.

The basic block can be seen as a 9 x 9 grid. It contains five smaller 3 x 3’s and four solid squares. The larger blocks may be arranged either on point or straight. Generally there are large solid squares between the patchwork blocks, making for a look that can range from elegant to electric, depending upon color and fabric.

No one really knows how old the Double Nine Patch pattern really is. Marie Webster in her 1916 book Quilts, Their Story and How to Make Them, shows a Double Nine Patch from Ohio in indigo and white and dated to 1808. The photo, shown below, shows the marvelous quilting. The larger blocks are set on point. It clearly came from that time when fine needlework was considered a hallmark of good bed covers. The plain white blocks are quilted in differing motifs and the border is deep. Thanks to the Gutenberg Project we can all read Webster’s work and learn much about the history of quilts from her perspective of 1916.

The Smithsonian’s National Museum of American History shows another Double Nine Patch from Ohio but dated to 1850-1875. The blocks are set straight and a feathered motif used in the plain squares. The family that donated the quilt to the museum also gave the wooden template that was used to mark the borders for the lovely “S” shaped quilting.

Jinny Beyer in her Quilter’s Album of Patchwork Patterns credits Webster with the first American documentation of the Double Nine Patch. She also references a variation called “Golden Steps” in a publication called Museum Quilts, date unknown. A variation of the Double Nine Patch, called “Green Springs”, appeared in a Nancy Page column in the Birmingham News in 1935. (Beyer, p. 240) 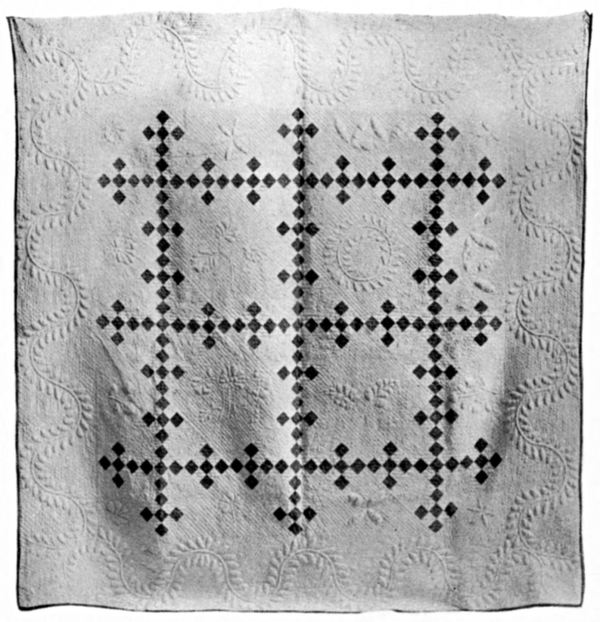 The 1808 Ohio quilt shown in Webster’s work. Photo courtesy of the Gutenberg Project. 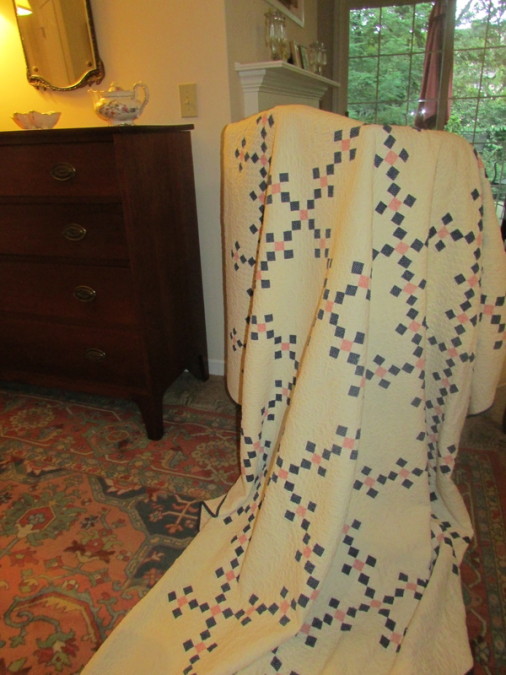 Our own Double Nine Patch, probably from the latter part of the 19th century, is set on point. The blue is indigo and what now looks to be pink centers in the 3 x 3 smaller blocks were, we think, originally red. The small squares are about 3/4 inch in size. Diamond-shaped quilting in the pieced blocks range from 1/2 to 3/4 inch apart. The solid white blocks are finely quilted in a wreath motif. The border is done in a feathered swag design. The material is cotton muslin and has yellowed and is deteriorating. It has no stains or any indication of practical use other than the fading of the red centers. We purchased the quilt from an antique shop and now have it properly protected out of the sun and in acid-free papers. 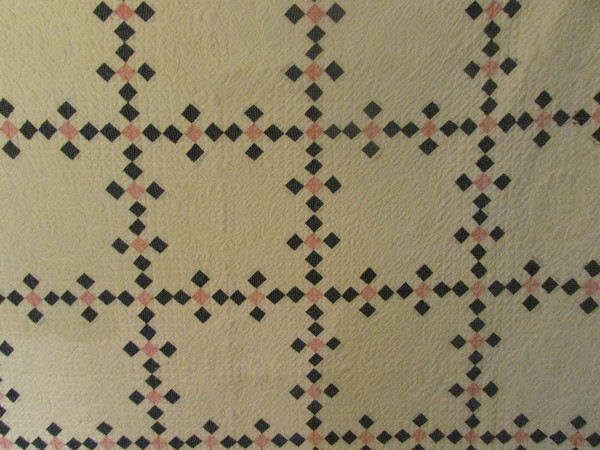 The quilting is quite fine. 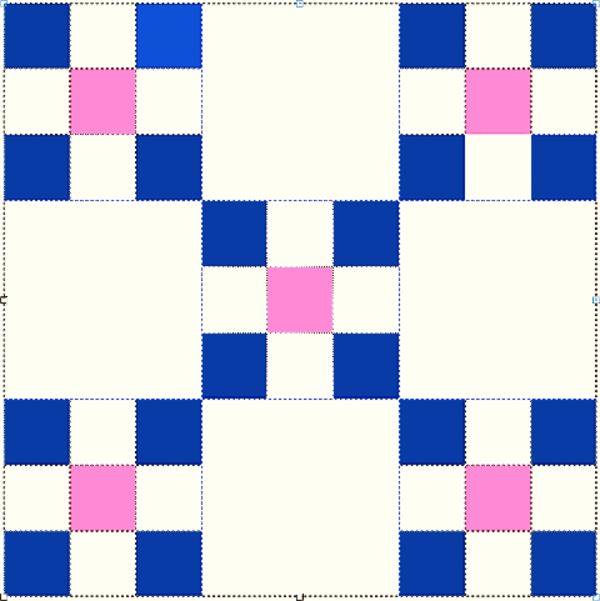 Although the drawing above shows the colors on our own Double Nine Patch, we’d love to see the pattern utilized more with modern colors and fabrics. Can you imagine how it would look with bright primary colors or the brights from the rainbow? We can always take something that stretches back 200 years and give it a feel that says “This is our time!”.

It’s always fun to get out the grid paper, draw some lines and experiment with color combinations using just colored pencils. Software, too, gives the option of drawing grids and filling them in with color from our computer’s palette. Sometimes just simple things like the Table function in most word processing software can be used to create a grid.

It is our time. We have more tools. We have the imagination…and we can break rules. Quilt on!